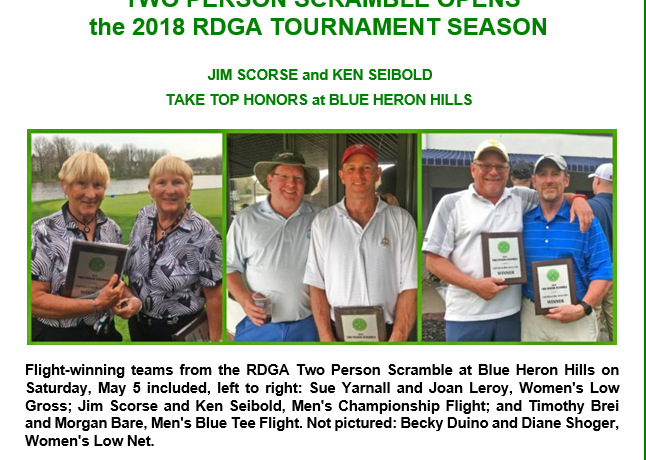 A field of 92 golfers – 46 two-player teams – competed in the season-opening 2018 RDGA Two-Person Scrambleat the Golf Club at Blue Heron Hills on Saturday, May 5.

The overall winning team in the Men’s Championship Division was Jim Scorse and Ken Seibold – who also won the RDGA Two Person Scramble title two years ago at The Links at Greystone.

Scorse and Seibold teamed up to post a score of 7-under-par 64, winning the overall title by two shots over the team of Luke Gurrero and Mark Kretschmann. Scorse and Seibold also earned spots in the RDGA District Championship at Monroe Golf Club on July 24-28.

Winning the overall title in the Men’s Blue Tee Division was the team of Timothy Brei and Morgan Bare, who finished with a score of 1-under-par 70. Brei and Bare won a three-way tiebreaker by matching back nine scores with two other teams who posted 70 – John Welch and Bill Cornish and Allan Hanaburgh and Craig Freeman.

The next event on the RDGA schedule is the Two Person Best Ball on Saturday, May 19 at Shelridge Country Club.